So There I sat at the dr’s office hooked up to a heart monitor. I was receiving my first dose of Gilenya and I was hopeful. I was hopeful not to have the ridiculous side effects I had with Aubagio.

Although Aubagio works well for some it didn’t for me. It’s an oral DMD which I was very happy about in the beginning. Not having to give myself injections was a wonderful thought. The side effects was so intense I didn’t feel it was worth what I was giving up. I was in even more severe pain and was depressed while taking that Med. To say my quality of life was made worse by that drug is an understatement. I am if anything a positive, happy, snarky little old gal. So I went back to Copaxone for a while. But with progressing to secondary progressive my neuro thought it was time for a change yet again. So I figured why not?

My neuro thought Gilenya might stave off some progression. I was game, I gave it a shot. Went in with a realistic view of things and figured eh I won’t know if I don’t try so what the hell?

They set me up in one of the rooms they do sleep studies in. It was a pretty nice set up. Comfy bed and cable TV. I was happy. My sweetie went and got breakfast from McDonald’s. Coffee and egg muffins. We never do McDonald’s but it was right next door so it was really convenient.

I’ve done so many DMD’s over the years it’s verging on ridiculous. With every different DMD I do and all the different side effects I feel like my body is being beaten to hell and back.

Lance and I sat there watching ID T.V, after all murder is always fun mid-morning. We was eating, laughing and watching tv. I was hooked up to a monitor and I knew they was on top of things. I felt like I was in good hands and my sweetie was there. Jake was going to come hangout for a couple of hours later in the day and David was working.

All of a sudden I had a flutter in my chest. I didn’t think much of it. Then the nurse pops her head in to ask if I was ok. I said yep I’m A-ok. She then said we got a reading I want to check so she hooked me up to another EKG and said hmmmm let me show this to dr.Barrio. I told her I did have some fluttering but didn’t think anything of it. I do sometimes get that feeling just not as intense. I’ve always just dismissed it as a palpitation.

This kept on several more times my Dr. came in and had me drink water and ran additional EKG’s. He explained to me that I will not be able to take Gilenya. He said I presented exactly what is NOT wanted when taking Gilenya. He then says after doing another EKG that I need to go to the hospital for additional monitoring because they’re not equipped to deal with a cardiac issue. The whole time he’s talking I’m thinking FUCK I HATE the hospital. But I’m compliant and got up and started to shuffle my crippled ass to the door of the observation room. He says no Mrs.King you have to be transported via EMS. Needless to say I was none too happy.

EMS gets there and loads me up and out the door we go. Big as shit on MLK blvd. for all the world to see. Alex being taken out on a stretcher. Not one of my finer moments in my opinion. Anyone that knows me,knows I’m a prideful woman. This part of things unnerved me more than anything.

We take the 5 min ride to the hospital while riding the Paramedic was able to start and IV and run another EKG. She was an impressive young lady. My hat was off to her. I complimented her on her skill while bumping around the back of a bus.

We get there I thank them and they put me in a room. I have to admit I was thankful I wasn’t left in the hall like at Gulf coast hospital last year. That was a true blue shit show.

Jake gets to the hospital as well as Lance. I called him only because I knew he was going to the dr office to hang with me during observation. Well he called David and got him worried. I admit I probably wouldn’t have called Jake had he not been coming to the dr’s office. I don’t like them getting worried and worry they do. They are as protective over their old momma as I am of them. Pretty sweet, but no reason to get everyone in a tizzy. 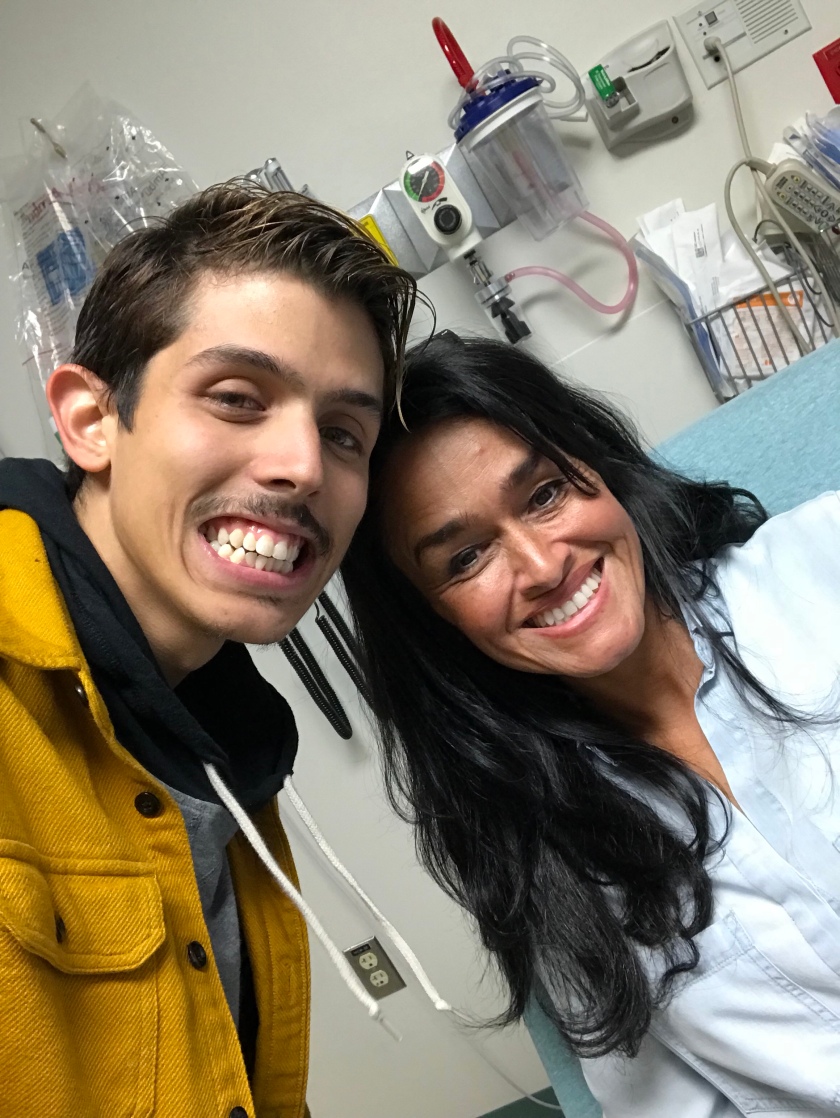 My Sissy was in a tail spin as well. But she’s a worrier ever since my Sissy Sylvia passed Trisha is on high alert. I get it, but I truly am pretty damn durable. I assured her I was fine and not to stress.

So I’m sitting there and the nurse finally comes in and greets Lance and I. She asked why I what was bothering me. I said nothing really and then gave her the low down on Dr.Barrio calling an ambulance for me because of my EKG. I then said I probably should be being monitored and an EKG given what just happened at the dr’s office. She lets me know real quick they was saving a life which was priority. I then shut my mouth and put things in perspective. I really felt like an ass after that, but she was a good heart and didn’t let my temporary ignorance interfere with getting me situated. We got to talking about my MS, turns out she has lupus since 2012. She got it she understood the struggle. She then told me how she was going to retire back when dx’d but had an issue with the pain meds and almost lost everything. That issue made her see how damaging sitting home doing nothing would be for her. She chose to redirect and continue working and being very careful with any meds she needed to take. This was impressive coming from a nurse. I appreciated her honesty.

She gets me all set up and leaves the room, when all of a sudden we hear an older woman screaming ” get the fuck away from me you mother fucking bitch” then responds a nurse saying “ma’am you have to calm down you’re not going to talk to me like that!” The old lady responds ” I’m fucking grown you’re not going to tell me what to do”. Lance and I look at each other and bust out laughing. I tell Lance “that’s what he has to look forward to when I’m elderly”. We had such a good laugh at that. It really lightened our mood.

Jake is in and out between my room and keeping company with his friend Brielle he had brought with him. They would only let two family members back. So he was in and out and trying to keep company with everyone. The ever lively life of the party as always. Briella was a sweetie for not being annoyed having to wait in the waiting area. I felt bad she was out there. It’s always the best and brightest of Bay county in that waiting room. Everything from meth heads to pill poppers hunting scripts to the mentally ill. It’s never pretty.

My room was a large room with a curtain down the middle with an area for another bed. So of course they brought a fella in while I was sitting there bare breasted getting an EKG. He couldn’t see because of the curtain, but it was unnerving still and all. His name was Dalton. Dalton was a talker, and a talker he was. He went on and on about his abscess in his butt cheek and how he had one under his scrotum last year to the nurses and dr. I was pure gagging when listening. Then he started talking about his Mrsa and gangrene he’s been through and how dr so and so had treated him in the past. Needless to say I was unnerved thinking how my immune system is already compromised and I really don’t want to contract anything while at the hospital.

I have to say I am not one to go to the hospital because of all the germ factors involved. But I got through. They asked after running several more EKG’s if I was ready to go? It was all I could do not to say fuck yeah I am. I got the hell out discussed all the crap we went through during the day and all of the mess I’ve been through over the years and decided I’m done with meds. The meds are way too hard on me. I’m tired of the ass kicking they give. So I’m going to deal with my MS on my terms. I’m going to rock this as best I can with good diet and exercise and hope and pray for the best.

I don’t encourage anyone not to take meds. If newly dx’d be sure to try to find what you can deal with and if it’s worth it for you. For me it’s been year upon year of headache and heartache. I’ve always been one to do as I want so I’m going to continue to do so. Between my strong faith and will and my family in my corner I’m going to live this mother Effer like a true G as my boys would say. Wish me luck😊 This gal is flipping the bird to the drug co’s until they come out with an actual cure. Not losing my positive silly ways just taking the best path for me:)

12 thoughts on “First and last dose of Gilenya”